Glory and Martha won the award of their project idea titled "Investigation and Analysis of Hydroponic Fodder as the Best Solution for Animal Feed and Health" that caters to drought conditions.

As a result of the victory, Glory and Martha won a trophy, shield, gold medals and cash prize of Tsh 1,350,000, while also received a university scholarship by the Karimjee Jivanjee Foundation (KJF).

Runner up award was taken by Albert Mhagama and Stella Kasalla from Kisimiri School in Arusha region who received a trophy, shield, silver medals and Tshs. 900,000.

During the 10th anniversary of the YST, students Yvonne Urio and Dorris Kilonzo from Rugambwa Secondary School in Kagera region, won the Hatim Karimjee Memorial Award with their project titled for the In-car Safety Improvement Project, where they also received cash prize of one million shillings, shields and medals.

On the other hand, Lameck Obeid and Dennis Ndahaje from Katubuka Secondary School in Kigoma received scholarships after designing the project 'Secret to Students from Poor Families Fail to Achieve Education Goals'.

In this year, the YST award ceremony goes virtual in order to avoid physical contact following the Corona virus Pandemic.

Speaking when presenting the Award from Dar es Salaam, YST co-Founder, Dr. Gozibert Kamugisha, said Covid-19 disease caused a lot of challenges, including the destruction of communication and scientific exhibitions.

“Because of the Pandemic, we were forced to change our systems and use digital means to reach out to students in their locations cities to check those jobs and make decisions through the internet," said Kamugisha.

Typically, the exhibition is held annually with the aim of increasing the incentive for students to love science subjects, while designing many projects in social science, technology and so on. However, Dr. Kamugisha said they have a lot to be proud of in the 10 years since the inception of YST, during which time they have been able to reach many schools and make significant changes in the field of science and technology.

"The community is really excited, and through this science fair, students have been developing various scientific projects that can provide solutions to the community based on the real concept of life," said Dr. Kamugisha.

The chairman of the Karimjee Jivanjee Foundation (KJF), Yusuf Karimjee, who is the main sponsor of the exhibition, said that by 2019 a total of 29 students who did well in the YST exhibition are being funded for their higher education.

"KJF we believe in enabling young people to get an education, that's why we help budding scientists show talent and creativity to bring development to Tanzania," said Yusuf.

In the 2020 competition, approximately 600 topics were presented from various schools in mainland Tanzania and the Islands. 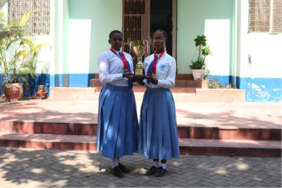